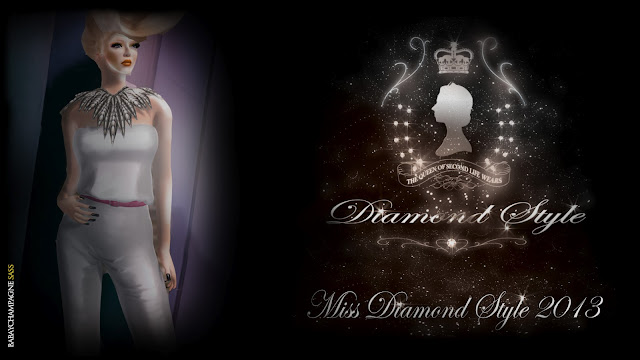 Starting in October, Diamond Style judges will pick four entries for the contest.  Four more will be chosen in both November and December.  Then on January 20, 2013, the big winner will be chosen as :
"  MS DIAMOND STYLE 2013 "
Here are the rules:
* Purchase a Diamond Style skin and outfit after September 26th
*  Dollarbies , 55l and 60l offers are not allowed to join the contest
*  Join the Diamond Style Group inworld

* Showcase Diamond Style on your profile picks during the contest
* Application completed 100% with showing Diamond Style  items purchase  transaction history.
* Two photos in the Diamond Style skin  and dress  :  1 close-up & 1 full  body
* No morph or and limited use of  photoshop  please
* Picture must be taken in high graphics, 1024 x 1024 pixels and  full perms.
* Please credit the photographer in the description.
* No logos, signs or names are allowed on the photographs.
* Re-name the photos 'Ms Diamond Style 2013  Contest - your  name'
* Send application to Ms Lisana Rossen, Manager of Diamond   Style

A panel of judges will decide the 20 contestants that will have access to the first round, those not selected   have the right to reapply the following month.
Here is the judging:
* Entries for the October judging must be received between Ocober 1st  and no later then  Oct 20th - 3 pm slt
* Entries  for the November judging must be received between November 1st and no later than  Nov. 20.th - 3 pm slt
* Entries for the December judging must be received between Dec 1st and no later  than Dec. 20. - 3 pm slt
* E ntries will be invited to appear on runway in front of the Diamond  Style judges on October 28, November 25 and  December 23 respectively for each group.
* Each month four entries will be invited to return for the Finals on January 20th.
* On January 20, 2013 the 12 selected entries will appear for the final judging.
* At the end of the evening the Winner will be selected!

* The complete 2013 collection from Diamond Style!
* The winner's Tiara from Alyssa Bijoux!

*  A training session with Classic with Style modeling school and  agency!
*  An interview with SLFierce Magazine!

* All new releases from Diamond Style for six months!

*All new releases from Diamond  Style for three months!